Taking a trip to the United States is something some Kenyans aspire to as a dream destination – Over 75 million tourists visit the United States each year. While some wish to visit places they see in the movies like Las Vegas and Washington DC, I aimed to tour the main fascinating sites in the country. This included attractions like Fort Lauderdale in Florida, Santa Fe in New Mexico,Fort Collins in Colorado, and Winston-Salem in North Carolina, among others.

I wanted to cover as much ground as possible. So before I flew out, I sat down and crafted my most desired destinations and things I would like to do once I landed. Doing so came in handy since I ended up having a fascinating time in America.

Here is a list of places I toured while I was in the United States. 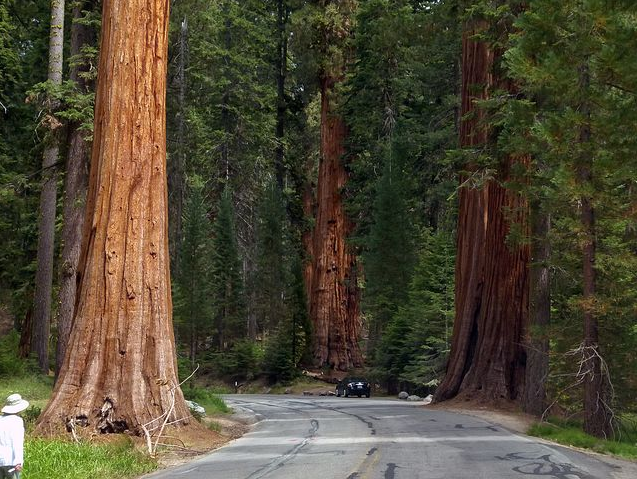 The first day was a bit slow since I had to unpack and acclimatize. I spent most of my time in my hotel room, relaxing. I later took a stroll and had a nice dinner at an exquisite restaurant nearby.

The next day I started my adventure, and the first place I decided to visit is the Sequoia National Park in California. The park is not only among the best places to visit in the US but also one of the most rated parks in the country. Sequoia boasts of a remarkable landscape that consists of giant sequoia trees. Mount Whitney gives the park a spectacular backdrop and adds glamour to the site. I passed by the General Sherman Tree, which is thousands of years old before I left.

MacKerricher State Park is famous for many things, including rare plant species as well as whales. But then, among the top reasons for including the park on my list was to see the famous glass beach.

The first time I heard of glass beach I swore I was going to visit the site when the time was right. The idea of a beach covered with sea glass was stunning. The site is marvelous and one of the places to visit if you want to have a lovely day. I stuck around until sunset and left for my hotel.

The next day I spent time at the Living Desert Zoo in Palm Desert. The attraction site offers a vast array of activities, including animal shows and hiking trails. I also took my time to visit the wildlife hospital, where I got some insight into how to treat animals. I also found the mountain lions and cheetahs a bit scary and amazing to watch.

I finished off at the botanical garden where I saw plants I have come across in Africa. The whole experience was fulfilling.

While in California, I also got to see part of route 66, which I learned stretches from Illinois. Throughout its stretch, the highway goes through eight states and a total of three time zones, making it one of the most popular routes in the United States of America.

If you’re a machine enthusiast or an avid motorcyclist who loves to ride, that’s the route you should explore.

Before calling it a day, I passed by a millennium restaurant and had a delectable vegan meal, which I washed down with a glass of refreshing juice.

5. The Wave In Arizona

On my fifth day, I took a trip to Arizona to visit The Wave. The sandstone rock formation remains to be a spectacular site that attracts huge crowds every day. The Wave also provides a perfect hiking spot for anyone who loves taking long walks while enjoying a breathtaking landscape.

You should, however, be quick since only twenty permits are given out in a day. The slopes of Coyote Buttes provide a great view making the region one of the best attractions in the States.

I also visited the Grand Canyon to see if it is as legendary as advertised. The place is dreamlike. I could only manage to set foot on the South Rim where I biked. I then took a helicopter tour to get a better view.

6. The Kennedy Space Center In Florida

The Americans were the first people to land on the moon, and so I had to see how they made that happen. That is why I went over to Orlando to have a look at the National Aeronautics center. The place is fantastic and sophisticated at the same time. At the visitor complex, you will see all sorts of space equipment.

My seventh day in the country was more about music and vibe, and that is why it found me in the city of music festival, Newport in Rhodes Island. At the place, people worship music, and I found it fantastic given that I often listen to jams whenever I want to clear my head.

I wanted my eighth day to be peaceful. That is why I saved Washington Park for last, and it worked perfectly fine. The gardens in the area are beguiling, and the impressive landscape is enough to make your day better.

I also stopped by the Farma medical clinic, which is one of the top cannabis dispensaries in Oregon. They also have some of the best strains.

With so much happening in this field in the US, I thought it was a must-visit to explore what cannabis offers to the medical world. The place is fantastic with amazing finishes. Bright lights enhance the beauty of this place multiple times.

It was not until I visited the yellow stone that I realized it was the first national park in America. The attraction has a fantastic landscape with breathtaking sites. I found places like the steaming geysers, hot springs and the long trails to be incredible. You can also book a tour guide and have yourself driven through the Lamar and Hayden valleys. I found the place fun and exciting, given that I am a nature lover.

10. The Statue Of Liberty

Leaving the United States without visiting the Statue of Liberty is one mistake that I was not going to make. I thus decided to make my last days exclusive by flying to New York which is easily one of the most happening places for planning a vacation.

The copper statue is phenomenal. Staircases are available to get you to the balcony where you can observe the stature better. The tickets were however limited, and it is only by luck that I got one.

Throughout my visit, I learned that the US is a fascinating country with many attraction centers which are not only fun but exciting to visit. I also noticed that if you don’t have a plan, you may find it hard choosing which place to visit and which one to spare for your next visit. My adventure was not only successful but also splendid.