Just as it is with any historical site that has stood the test of time, the four walls of the “Travelers’ Chapel” are shrouded in a lot of mystery and myth. Word goes round of a ticking clock that can be heard but is never seen. It has even been said that those who erected the structure hid their jewels and wills in the church concrete columns setting enthusiasts on a hunt for the ‘hidden treasure’. Perhaps it is these great tales – amongst others, that make this landmark of sorts intriguing. Or maybe the fascination is purely based on its miniature build. 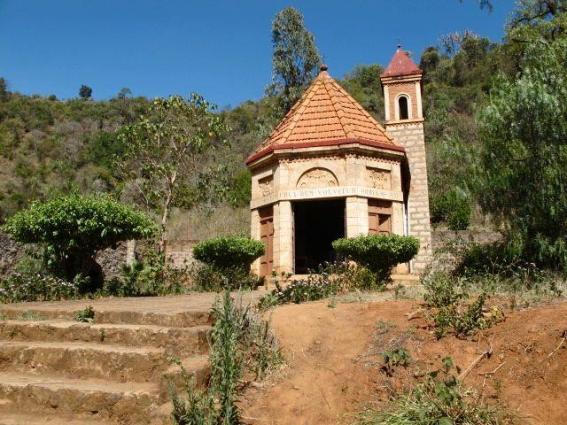 Listed as the smallest church in Kenya (and possibly Africa), the “Travelers’ Chapel” which is commonly referred to by its alias ‘Msikiti – mosque’ by the locals sits pretty along the Mai Mahiu-Naivasha highway. Its story dates back to the Second World War where we are told that British and imperial forces captured more than half a million Italian soldiers, sailors and airmen. Whilst having these prisoners of war (POWs) around as a symbol of military success was all good, The British soon realized that in as much as their ‘symbols of victory’ brought high standing for their ranking in the war, they also posed a few complications as they came with needs as well; one of them being having a place to worship. Seeing that the Italians were Catholics and the British Anglicans, the two parties could not worship together and so they were allocated land to build their own place of prayer.

Under the strict supervision of British colonialists, the construction of The Mai Mahiu Catholic Church popularly referred to as the “Travelers’ Chapel” came to be in 1942. The Italian Prisoners Of War (POWs) would take turns to erect the structure during breaks from the construction of the road. The building of the church was however not without any setbacks. For instance, a number of Italians succumbed to diseases and attacks from wild animals, which included poisonous snakes that allegedly live in the area to date. Several graves lie outside the church compound where the deceased were laid to rest. Thanks to well wishers, a mausoleum has since been erected in form of a cemented cross in honor of the fallen Italians. 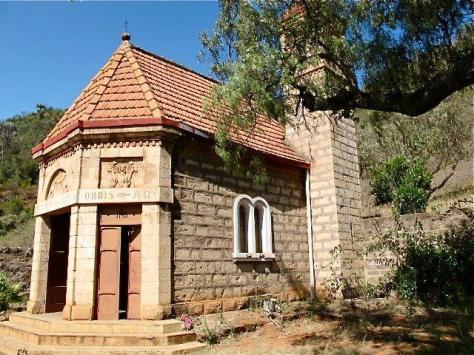 The pentagon-shaped church interior has four small wooden pews and an altar with a pulpit. Measuring 15 by 8 feet, it has a capacity to sit 12 people during mass. Just like its bigger counterparts, the church has three normal doors for access.

The inside walls are decorated with inscriptions in Latin. Above the stained glass windows and the entrance doors are painted the words, Venite Ad Memone (Come to me my people), Haec Est Victoria Quae Vincit Mundum Fides Mustra (This is the victory that has won the world by our faith), Benedicite Coeli Domino Benedicite (Blessed be the sky and blessed again) and finally Universa Germinatia In Terra Domino, which translates to, everything will germinate in the sky and also on the earth.

Behind the altar is an old mural of the nativity scene (baby Jesus and his parents Mary and Joseph) surrounded by angels thought to have been created in early 1943. It is not very clear who painted the mural but it is nonetheless credited to Navitatis NDJC. The reason behind this lack of clarity is that “Navitatis” does not seem to have done any works of art before or after the mural at the Mai Mahiu Catholic Church. There is, however, a name inscribed on the mural that refers to Pittore R. and the date 25.02.1943. All that this confirms is the date the mural was painted – 1943. It could as well be that Pittore did the mural – this is still subject to confirmation.

The church has three steps at the entrance that according to Ann Nyakio, a caretaker, symbolizes the Holy Trinity; the Father, the Son and the Holy Spirit. There are also two crosses on the roof and a compass that symbolizes that the church will stay as long as the world will turn around it.

Today, the Mai Mahiu Catholic Church is management by the Italian Embassy, the Kenyan government and well wishers who pump in their resources to conserve this religious historical site. The “Travelers’ Chapel” is open to all members of the public free of charge. Interestingly though, Christians and Hindus are allowed to worship, whereas Muslims can only visit.

2 thoughts on “LITTLE TRAVELERS CHAPEL ON THE HILL”

📷: @arijiju Sun - dappled corners perfect for lunchtime picnics showcasing local flavours and fresh produce right from our own organic garden. #zurukenya #lunchisserved #safariinkenya #destinations #travel #instatravel
#Reposted from @expthevillage Welcome back to the #MasaiMara. Another #ExptheVillage #adventure begins...
#Reposted from @guyswhoroam "Working from home"
#repost from @anyotherdiscovery Graceful flamingos changing the color palette of kenya 👌
📷: @schamorro.photo Refurbishment
'Tis the season! 📷: @intrepid_meg Watching the great migration in Kenya was one of the best experiences, although watching wildebeest throw themselves down these riverbanks was quite scary 🐃
Careful, you don't want to be trumpled on...but isn't this just the perfect shot? 📷: @gerryvanderwalt
The only man I envy is the man who has not yet been to Africa - For he has so much to look forward to ~Richard Mullin
Isn't this just beautiful!