You may have noticed that majority of beach hotels have erected fences along the shoreline, leaving only a narrow opening leading to the beach. Perhaps you have come across some Samburu and Maasai men roaming the stretch of the shoreline as well?  In as much as they are an attraction to tourists, these young men serve as barricades, hired by some hotels to serve the same purpose as the erected fences.

Knowing very well that hotel guests come here looking for some relaxation time by the white sandy shores, why then would these establishments go to such lengths to keep them fenced in? Well… have you heard this before, “when you head down to the beach, pay no mind to the beach boys!”

Ah, yes, beach boys! The mere mention of the words has tourists and locals alike, running for the hills.

These people will ruin your day. They do not take no for an answer. They will adamantly try to sell you whatever favors are on offer for that day. And if you think those fences are good enough to keep them away, guess again, they will cling on for dear life, calling out for you until you heed their call.

Beach boys have a keen eye too. They will spot you the moment you set foot on the white sands. Instantly working out tactics in which to reel you in. Like fresh prey, you are just another meal ticket for the day’s survival walking through these “vultures’” door.

Would you be interested in a boat excursion to the Watamu Marine Park?” a somewhat young guy approached us. He introduced himself though I forget his name.

“No thanks! We are just walking” we responded.

“How about snorkeling? Promise you’ll have loads of fun”

“We weren’t prepared for that today…Asante, pengine Kesho! (Thanks, perhaps tomorrow!)”

Now, whenever you tell Kenyan hawkers “no thanks, perhaps another day” – accompanied with a polite smile, they generally tend to leave you in peace, of course, after few attempts of trying to convince you to check your pockets again, but they do move on without a hassle in search for the next potential client (Lessons learned from years of having to negotiate buys at the market).

So when we said perhaps tomorrow, he said okay and left.

Only to come back with a booklet filled with photos showcasing the excursions they offer…haha *facepalm emoji* sigh!

This guy just wouldn’t let up.

“Tomorrow we can go see the dolphins, yeah?!”

Knowing we weren’t even going to be there tomorrow we just said we’d think about it.

“Okay, if you don’t want to go on the boat trip, maybe you can check out the sourvenirs we have at our hang-out joint?

Man, this guy’s marketing skills were up there with the rest of them. Although, I now get how the dogged persistence can be wearing and a tad-bit annoying. He and his crew spend their days at a small makuti restaurant (their hang-out joint) by the beach from where they chill and wait to spot potential clients. The restaurant is owned by one of them; it’s apparent that “beach boys” spread themselves thinly over a wide range of deals rather than specializing in one so as to cushion them from uncertainty.

We had nothing to lose so we obliged. On approaching the “hang-out joint” a number of other beach boys came over to say hi asking us where we were from and so on. One of them on noticing I had a camera requested for a photo with one of us. That is how I met Hussein Guida Turistica (I learnt his name later on).

“Come upstairs” the rest of them said. The restaurant had a balcony lounge with a real nice view. “C’mon we won’t bite, come hang out with us.”

Once upstairs, they all introduced themselves and offered us seats. Our conversations involved their experiences at the beach, selling several services and what excursions they could take us on; at some point they would shift from Swahili to Italian to keep us from understanding what they were talking about. “Have you eaten, we have food you can buy” one said. “Or perhaps something more relaxing,” the guy who had initially approached us added. He explained how he had taken some alcohol earlier that day to relax. Apparently he worked better that way. Before we knew it he was singing a tune holding a make-shift microphone, explaining the benefits of alcohol…hilarious!

Amidst our conversation I enquired on whether they could take me across the shore to the little lagoons. I wanted to take a nice shot of the beach line from the other side. Hussein offered to take me…said he’d do it for free even. There was no need for a boat ride as one of them could be accessed on foot which provided for a good opportunity to have a real conversation on the “beach boy” life and his experiences.

Until the recent security threats, Hussein used to go by his real name. But during this period, he went by the alias ‘Brian’ for obvious reasons. Asked why he is in this business, to fend for his family the only way he knew how. He wasn’t fortunate enough to proceed with his education. His family didn’t have the funds. 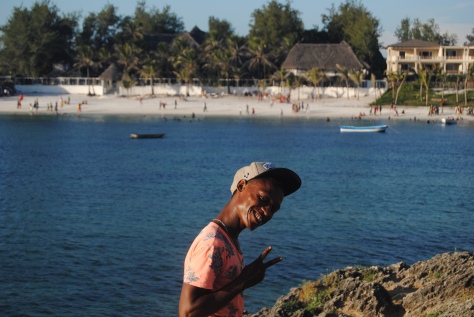 Many of the beach boys along the Kenyan coast are in the profession because it’s what they know. Their fathers were also in the same business so it’s only natural.

It is also well known that aside from boat safaris, beach boys also trade drugs as well as sexual favors. He however told me that there are two types of groups clumped into the definition “beach boys” saying that the latter, gives them bad repute. “They have nothing to lose hence why they engage in sex for profit; constantly seeking foreign women (and even men) to upgrade their lives perhaps fly them out of the country even.”

He prefers to go by the title ‘beach operator’ doing honest work as an improvised tourist guide and translator. Some Italian hotels hire them as full time tour-guides assigned to groups of tourists because well, beach operators have proven to be a huge tourism attraction despite the negative connotation linked to their profession. Hussein is up to date with all the fun up-coming events in Watamu; a good guide has to be after all. He tells me that in the evening they will be having a beach party by the restaurant which is open to all and extended an invite. Unfortunately though, we weren’t sticking around till evening.

He furthermore, informed me that he only works here to fend for his family; his mother and siblings. When he’s not at the beach, he is performing as a street dancer, something he says his mom discourages him from. “She’s just afraid I’ll hurt myself,” he says as he shows me the scar he got on his face from a fall the previous night during his performance. “But it’s my dream and passion,” he adds.

As we continued along the beach stretch, I noticed that he was really popular with the locals here, everyone from children to his peers and even older stopped us just to say hello. Perhaps it was his kindheartedness and soft nature that captivated and enticed him to people. 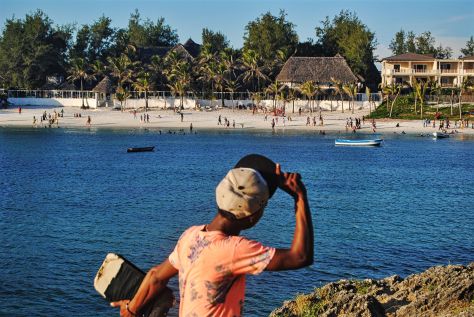 Hussein went on to tell me of his challenges and future aspirations. “You see that building there,” pointing to a hotel construction at the beach stretch that is in its final touches. “I hope to one day earn enough money to afford me just one night’s stay at that place and get the royal treatment that all these tourists get.”

For now, nothing is standing in his way to achieve his passion and dreams; he has plenty of time to earn that night’s stay.

2 thoughts on “HUSSEIN GUIDA TURISTICA: THE ‘BEACH OPERATOR’ WITH A DREAM”