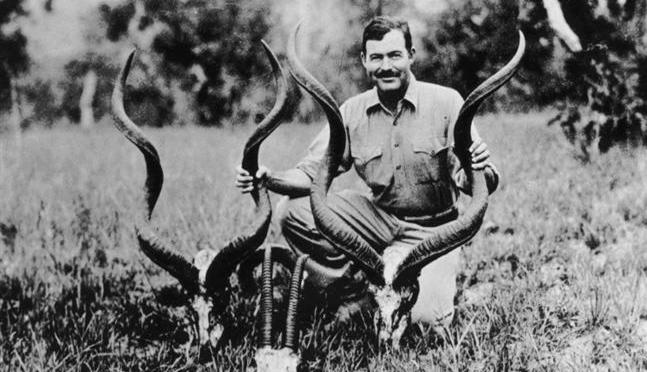 The legendary American writer Ernest Miller Hemingway (1899-1961), winner of the Pulitzer and Nobel prizes,  was probably the one introducing the word ‘safari’ to the English language. Hemingway traveled in East Africa two times in his life and the experiences gave him material for several short stories and novels. The remarkable personality of Hemingway also contributed to the image of the Great White Hunter. He was probably not the greatest of hunters but he had a true love affair with the hunting experience, the nature and wildlife of Africa. Without learning the Swahili language he also managed to have some understanding of the Kenyans, which was far from common at that time.

“All I wanted to do now was get back to Africa.  We had not left it yet, but when I would wake in the night, I would lie, listening, homesick for it already.”

From early in his life Hemingway traveled more than most people at that time. He had an enormous appetite for adventure, war and danger. That gave him a chance to show of the macho image he was creating for himself all his life. The first visit to Kenya and Tanganyika was in 1933 with his second wife, Pauline. He was probably a bit bored at the time seeking out new inspiration. Early on the safari Hemingway was sick with dysentery. He stayed several weeks in Nairobi where he met other adventure seeking men from Europe and America. One of them was Bror Blixen, the husband of Danish writer Karen Blixen (Isak Dinesen). After continuing the safari and returning home Hemingway started writing the travel description “The Green Hills of Africa”. The book did not sell well at first, which depressed Hemingway, but his two major African short stories were quickly recognized to be among the highlights of his writings (The short happy life of Francis Macomber and The snows of Kilimanjaro)

In the winter 1953-1954, Hemingway set of for Africa again. A bit older and changed – drinking far too much. Now traveling with his fourth and last wife, Mary, to enjoy another safari. He also wanted to visit his son, who was living in Tanganyika (Tanzania). The visit was in the middle of Kenya’s Mau-Mau rebellion ignited by later president Jomo Kenyatta. The rebellion against the British colonialists was very violent. Hemingway almost lost his life on this journey, but it was not as a victim of the Mau-Mau. As a matter of fact, it happened 2 or 3 times that Hemingway was declared dead (only the last time, of course, was it true). In January 1954 he had the rare chance of reading his own obituary notice. On the journey from Nairobi to Bukavo – Congo, he and Mary had several emergency landings in the small airplane together with the pilot Roy Marsh. They had two serious crashes near Entebbe in Uganda. They were alive, but wounded after the plane disappeared in flames. They decided to return to the luxury of New Stanley Hotel in Nairobi.

Hemingway wrote about this second safari and his flirt with a young, wakamba girl. The book is written as fiction, but most of it can be read as the diary of Hemingway. ‘True at first light’ was published posthumous in 1999. The unfinished manuscript was completed by his son Patrick. Ernest Hemingway shot himself on July 2nd 1961.

Things you may not have known about Ernest Hemingway…

In the last few years of his life, Ernest Hemingway grew paranoid and talked about FBI spying on him. He was even treated with electroshock therapy as many as 15 times at the recommendation of his physician in 1960. It was later revealed that he was in fact being watched, and Edgard Hoover had personally placed him under surveillance. In 2009, the publication of Spies: The Rise and Fall of the KGB in America, revealed that the FBI was in fact right to spy on Ernest Hemingway, the Nobel prize-winning novelist, because he really was on the KGB’s list of its agents in America. Based on notes from a former KGB officer who was  given access in the 1990s to intelligence archives in Moscow from the Stalin era, the book reveals that Hemingway was recruited in 1941 before making a trip to China, and was given the cover name “Argo”.

According to Soviet documents, he met with Soviet agents during the 1940s in Havana and London and “repeatedly expressed his desire and willingness to help us”. In the end, Hemingway turned out to be of little use to the Soviets  however, as it’s claimed he failed to give them any political information and was never “verified in practical work”. By the 1950s, “Argo” was no longer an active Soviet contact. Some project that Hemingway’s escapades as a KGB spy were more likely all part of an elaborate charade by him to gather literary inspiration. Others suspect his paranoia over being watched by the FBI may have led him to take his own life.

In the end, the only thing that could kill Hemingway it would seem, was himself…

“In 1954, while in Africa, Hemingway was almost fatally injured in two successive plane crashes. He chartered a sightseeing flight over the Belgian Congo as a Christmas present to Mary. On their way to photograph Murchison Falls from the air, the plane struck an abandoned utility pole and “crash landed in heavy brush.” Hemingway’s injuries included a head wound, while his wife Mary broke two ribs. The next day, attempting to reach medical care in Entebbe, they boarded a second plane that exploded at take-off, with Hemingway suffering burns and another concussion, this one serious enough to cause leaking of cerebral fluid. They eventually arrived in Entebbe to find reporters covering the story of Hemingway’s death. He briefed the reporters and spent the next few weeks recuperating and reading his erroneous obituaries.”

3. Ernest Hemingway was charged with war crimes under the Geneva Convention when he took command and led of a group of French militia into battle against the Nazis.

Hemingway as a young soldier

Serving as a war correspondent during WWII, he had removed his non-combatant insignia and posed as a colonel. In the end, he was not convicted and claimed that he only offered advice and any titles given to him by the men were simply signs of affection. According to Hemingway himself, he and his unit were the first to enter the city during the Liberation of Paris, when he and his unit retook the Ritz Hotel, and more importantly the Ritz Bar, from Nazi control a full day before the Allied liberation force entered the city!

4. Ernest Hemingway killed himself with his favorite shotgun bought from Abercrombie & Fitch.

The suicide of his father haunted Hemingway until the day he followed his example. Indeed, depression and suicide plagued the Hemingway family: His grandfather committed suicide. two of Ernest’s sisters and his only brother, Leicester also killed themselves; two of his three sons received electroshock therapy for emotional turmoil; his granddaughter Margaux, a supermodel and sister of actress Mariel Hemingway, died in July 1996 in what was deemed a depression-related accident. Margaux and Mariel’s father, Hemingway’s eldest son John, now 75, has said with grim humor: “My brothers and I are determined to see just how long a Hemingway can live.” (Neil A. Grauer, Remembering papa)

📷: @nickbarose - #Mood When fashion travels to dreamy places. 📸✈️✨✨✨ @lupitanyongo photographed at the #KitMikayi rocks in #Kisumu #Kenya. #Vogue #Travel #lupitanyongo #TheEyeHasToTravel 👁✨✨✨ - #zurukenya
Stripy, sun dusty and extremely beautiful. Good morning! . 📷: @spoart. #Sourced from @lovelaikipia . #Sunset #Zebra #WildLife #Nature #Travel #Safari #WhyILoveKenya #Kenya #lovelaikipia #Laikipia #OlJogi #WildLifePhotography #Explore #Adventure #Discover @oljogi - #zurukenya
The essence of traveling to the countryside couldn't have been captured more perfectly 👌 by @doubleonthemove Travel lightly? Not when you accompany a local friend visiting her family far away. This time even a bed and matrasses came along! 🐦⠀ 🦎⠀ This pic was taken after some 18 hours travelling: 12 hours in a night bus from Kampala (Uganda) to Nairobi (Kenya), then another 4 hours to a remote village near Ekalakala, Kambaland. The last part of the trip we took a bodaboda: jumping behind on a motorcycle. An adventure on its own 😉. Yes the bed and mattress came by motorcycle too. Everything is possible in Africa.⠀ 🐦⠀ 🦎⠀ 💡Tip: travelling on your own is really exiting, but in Africa... don’t travel alone. Arrange a local person whom you trust! 🖐🏻Can you guess why? I’ll explain my story in a later post. ⠀ 👉🏼Stay posted by hitting the Follow button for @doubleonthemove! 💃🏼💃🏼⠀ 🐦⠀ 🦎⠀ 🐦⠀ 🦎⠀ #doubleonthemove #worldisnotbigenough #neverstoptravelling #cultureandvibes #alwaystraveling #reisjunk #sheisnotlost #offthebeatenpath #offthebeatentrack #unexpectedplaces #chooseadventure #expecttheunexpected #middleofnowhere⠀ #africanbush #africanbabies #kenia #visitkenya⠀ #travelkenya #igkenya #magicalkenya #kamba⠀ #kenyatravel #volunteeringabroad #volunteering⠀ #volunteeringisfun #nairobikenya #igersnairobi⠀ #seekenya #masai #villagelife⠀
#zurukenya #feature 📷: @marlinamoreno - There’s just no place like Africa. From its bushveld to its forests~ I never feel more alive or more inspired to create than when I’m on this continent. In an unexplainable way it feels like home to me. Perhaps I grew up in Africa’s wild in a previous life, or perhaps it’s where I am to grow old in this one.... whatever it is that draws me here I am grateful for it 🌍💜 #margonewild #thisisafrica . . . . #africatravel #wildlifetourism #kenyatravel #wildlifeconservation #girlswhotravel #martakesafrica #adventureawaits #exploreafrica #ecotravel #ecotourism #africansafari - #regrann
Reposted from @italian.roamers - Have you ever tried to see things differently? #italianroamers ___ Shot by @nickpescetto selected by @andre.tura ___ #kenya #visitkenya #wildernessculture #goprolife #visualart #camel #kenyamoore #camelback #roamtheplanet #livingfolk #thevisualcollective #all2epic #folk2good #visualsoflife #artofvisuals #folkgood #folkscenery #folkcreative #lifeofadventure #adventureisoutthere #kenyatravel #kenyasafari #wondermore #wanderlust #instagood - #regrann
📷: @wanderlu_wanderlu I like hotels where I can see the pool and ocean at the same view. 🌊🌊🌊🌊🌴🌴🌴🌴 - #regrann #beach #kenyancoast #coastlife #beachlife #travelgrams #beaches #resorts #instatravel #travellifestyle #visitkenya #travelkenya #zurukenya #Regrann #poolside #dianibeach #dianiresorts #travel #travelbloggers #travelblogger_de #travelphotographer #travelbloggervibes
Africa is resilient! Our people go hard every single day; Sourcing for their families and building the economy. We don't make excuses, we only find solutions! #AfricaIsMore . . . #travel #travelphotography #traveling #world #Africalandscapes #Africa #kenya #kenyalandscapes #landscape #landscapephotography #landscapelover #fishermen #landscapes #love #Africa #workers #kilifi #canonphotography #canon #reflex #instagood #instalike #instatravel #ocean #sailboat #sailboatlife #sail #instasailing #fishing #instafishing
We know this is how some of y'all celebrating Madaraka Day! Cheers 🍻 📷: @gowithjon #tusker #beerstagram #instabeer #kenyanbeer #tuskerlager #beersofafrica #tuskerbeer #masaimara #africansafari #travelkenya #kenya #africanwildlife #igtravel #drinkup #jdvacation #zurukenya #kenyanculture #beerculture #kenyanbrew
The only man I envy is the man who has not yet been to #Africa...for he has so much to look forward to #AfricaIsMore